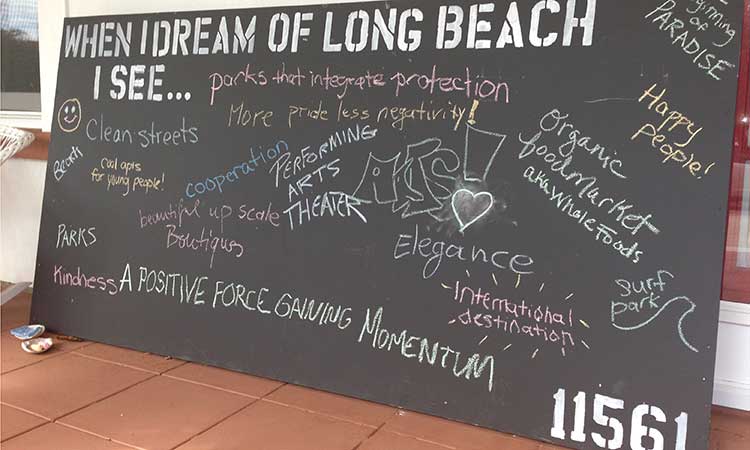 The community of Long Beach, NY, came together in a big way after Superstorm Sandy, helping neighbors gut their homes and hosting countless fundraisers to help get local businesses back up and running. They love their community and want to see it come back, not just the way it was, but better than it has ever been.

It is in this spirit that they launched Imagine Long Beach in November 2013, a crowdsourced placemaking initiative to revitalize their downtown.

The Story Behind Imagine Long Beach: In June 2013, several members of the Long Beach community became aware of a contest being held to conduct a feasibility study of re-development potential across Long Island.  Long Beach subsequently won this opportunity and, to the surprise of no one, the results showed Long Beach is indeed a viable community that would be successful in supporting a crowdsourcing destination program. As a result, a local Long Beach team formed to advocate for a crowdsourced destination program, and reached out to real estate developer Renaissance Downtowns to seed the program which included training, staff support and a crowdsourced placemaking program managed by CSPM Group.

Goals for Imagine Long Beach: The crowdsourced placemaking system builds consensus around ideas the community shares the most interest in, that are triple bottom line: economically, environmentally and socially beneficial. The winter 2014 goal is to define ten ideas and ten sites to earn a private sector investment analysis to implement those ideas, through the Imagine 10/10 Campaign.