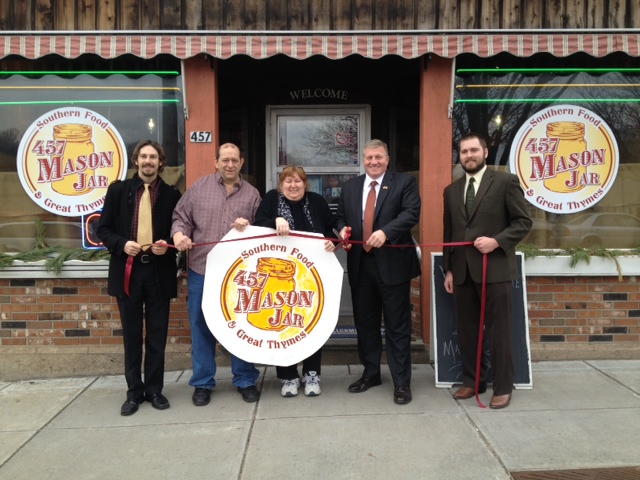 Mike Clawson and his family knew their restaurant was heading toward the inevitable fate of closing shop, that is, until the local community jumped in to help crowdsource and crowdfund a new vision.

In 2009 Clawson realized his dream by purchasing a small brick and mortar restaurant on North Main Street in Bristol, Connecticut named the Tortoise & Hare Cafe. After purchasing the Cafe he thought he would maintain the restaurants following to capitalize on an existing customer base and to grow it, but he ran into issues he didn’t see coming.

After he purchased Tortoise he realized the business wasn’t as strong as anticipated, and the perception, he learned, was even worse. What he felt was a quaint establishment with a solid customer base came off as old and frumpy especially to younger folks. The southern flair that Clawson likes to cook with, wasn’t being communicated through the name of the restaurant, and on top it that, few people knew the restaurant even changed hands.

“It was probably my biggest regret, not changing the whole thing up, especially the name,” recalls Clawson.

By the time the Clawson family saw things were seriously wrong, their financial reserves were so low they couldn’t do anything about it.

Feeling as if he was chained to ball and about to sink to an eventual demise he sought help from Bristol Rising, a crowdsourced placemaking community using the CSPM System to assist in Bristol’s downtown revitalization effort.

“Tortoise had a major communications problem,” said Mark Walerysiak Jr, Bristol Rising’s Community Liaision. “He was doing good food with an interesting Southern twist, but there’s nothing about “Tortoise & Hare” that says that. It was time for a rebranding.”

So rebrand they did. Teaming with Bristol Rising, Clawson reached out to the group’s 2500 members for in-person brainstorming sessions and online surveys looking for new names, tag lines, decor, color schemes, and menu items. Finally, a concept was settled on—457 Mason Jar: Southern Food & Great Thymes.

The community was loving it. After all, they helped develop it. With a vested market in Clawson’s back pocket, all he needed was the money to make this dream happen.

Enter crowdfunding. Bristol Rising embarked on a crowdfunding campaign to rebrand Tortoise into 457 Mason Jar through Kickstarter, looking to raise $6500 in 20 days. The campaign reached it’s goal on the final day possible, Christmas Eve, to the tune of $7900. Needless to say, the Clawsons were thrilled.

However, the real test was yet to come. Would the crowd support the new restaurant they helped create? With the new name and personality to go along with a whole new look, 457 Mason Jar opened its doors on January 16 and immediately took the city by storm. Lines were out the door for dinners, and there was no longer any mistaking what the establishment was. Clawson’s personality now lined up with the brand.

And the proof was in the BBQ sauce. Comparing the 1st quarter of 2013 to the first quarter of 2014, 457 Mason Jar has seen a 42 percent increase in business. That’s despite the fact Mason Jar was closed for the first 15 days in January to prepare for their grand re-opening.

“We’re so thrilled. Honestly we thought we would be goners, but the community really rallied behind us and helped us realize our dream,” Clawson said. “For that, we’re forever grateful.”

As for the Bristol Rising community, the question is now, “Who’s next?”

This entry was posted on Wednesday, April 30th, 2014 at 12:47 and is filed under Blog. You can follow any responses to this entry through the RSS 2.0 feed. Both comments and pings are currently closed.