People are in, cars are out, in cities around the world 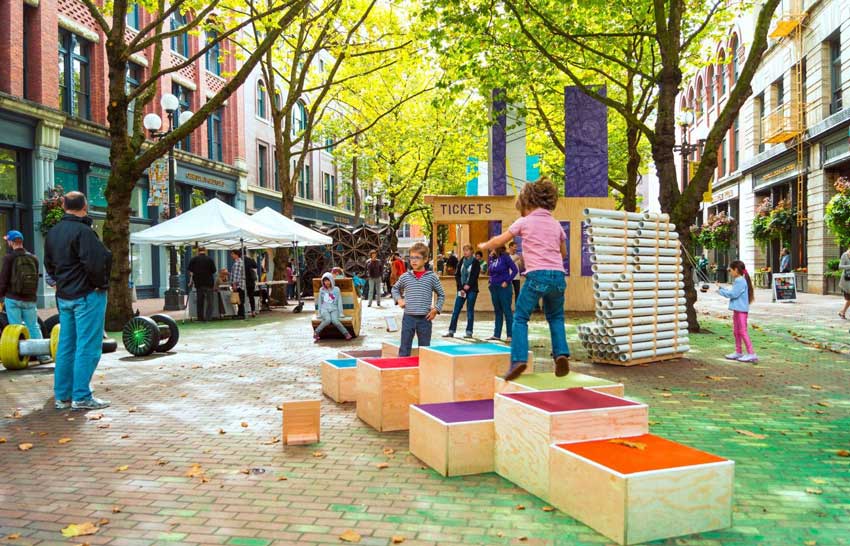 As we increasingly find more evidence that walking/exercise makes us happier, we’re also driving less. Driving in miles per capita peaked in 2004, and by 2011, 48 of 50 states had peaked as well, with Washington state way back in 1992. The number of cars per driver in the US has fallen since 2007, from 1.2 to 1.15. Millennials are more willing to live in cities, and 67% of them in the UK would rather spend money on tech and recreation than cars. As a result, the hottest companies are moving downtown too. Research shows walkability can boost foot traffic by up to 40%, and retail rents by up to 20%, while Walk Score shows an increase in home values of between $700 and $3000 for each point on a walkability score out of 100.

The evidence is worldwide. In San Francisco, the majority of trips are now made without cars. In London, cycling levels have risen rapidly over the last couple years, now one-sixth of all traffic in the city center. Liuyun Xiaoqu in Guangzhou, China, which has invested heavily in mixed-use; Hammarby in Stockholm, a newer development where only 21% of trips are done via cars; and Vauban, a neighborhood in Freiburg, Germany, where only 16% of its residents own cars, are becoming model cities for prioritizing people over cars. Check out this slide show of seven more cities focused on going more car free: Madrid, Paris, Chengdu, Hamburg, Helsinki, Milan and Copenhagen, and this story and video on how Stockholm is taking pedestrian living to a higher level, focusing on the health and economic benefits of a car-free downtown.

The evidence is also in the experience. Columbus, Ohio became one of the latest cities to temporarily close downtown streets to cars at their Open Streets event. Aukland, New Zealand and Vienna, Austria are redesigning streets without curbs, but instead as a level textured surface shared by pedestrians, cyclists and motor vehicles. Known as shared spaces, the results are striking, with increases in pedestrian volumes from between 10% to 140% and increases in retail spending from 27% to 439%. The Netherlands, along with Denmark, continues to prioritize a biking culture above a driving one, especially for women, the only countries where women cyclists outnumber men. Even kids are demanding a bicycle city culture too.

How can your city get on the bandwagon? Peruse these municipal recommendations for reducing car dependence, and learn about Jan Gehl, the world’s most knowledgeable architect on designing pedestrian streets and destinations. Maybe one day your city can follow the lead of Suwon in South Korea and Johannesburg, South Africa in opening up an entire neighborhood to pedestrians by removing all cars for a month-long celebration of freedom and vitality. Yes it actually happened, starting in Suwon. See the video below.

This entry was posted on Thursday, April 30th, 2015 at 09:11 and is filed under Blog. You can follow any responses to this entry through the RSS 2.0 feed. Both comments and pings are currently closed.