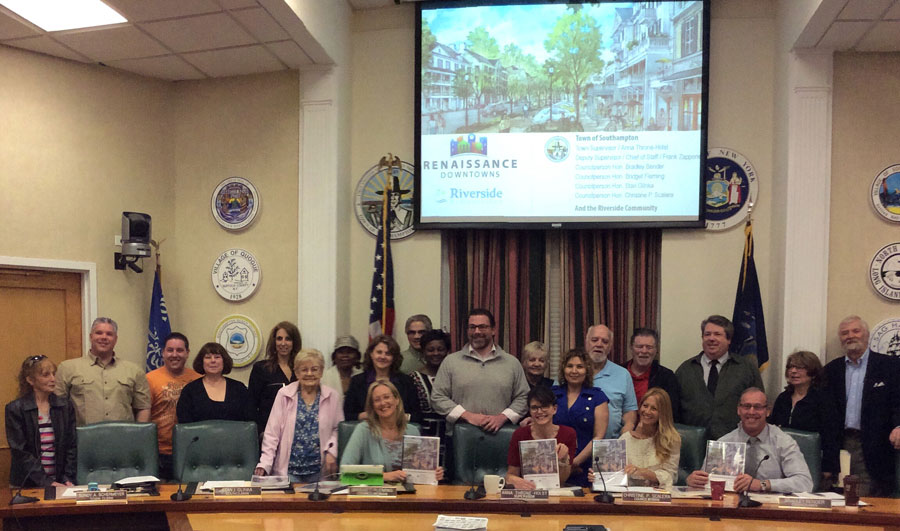 30 members of Riverside Rediscovered, a crowdsourced placemaking community in Riverside, Long Island, New York, along with representatives of Renaissance Downtowns on April 30, 2015 submitted to the Southampton Town Board a 200-page plan to revitalize Riverside, the struggling hamlet just south of downtown Riverhead.

The Riverside Rediscovered Action Plan includes new pedestrian-oriented zoning recommendations that would allow a promenade along the Peconic River, and buildings with apartments above and storefronts below. The plan is subject to approval by the town board and a state environmental review.

“With the right zoning and investment, it could be a scenic community with a thriving downtown and much-needed housing for the East End’s workforce. It has over 1000 acres of preserved property and four miles of waterfront, yet it’s the most disinvested hamlet,” said Renaissance vice president Sean McLean. Siris Barrios, community liaison for Riverside Rediscovered, added, “We had a great meeting! The residents were excited about turning in the RAPP. You could see that they truly felt a sense of power to influence their community.”

Just a couple weeks later, Riverside Rediscovered members collected 250 signatures to ensure that the Suffolk County Legislature re-appropriated 4 million dollars for the project in year 2016 that would have otherwise been moved to 2018. Positive change begets positive change.

Background:
Riverside, home to 3000 residents, has struggled for decades with poverty, crime and roads lined with deteriorating houses and shuttered businesses. In April 2014, Southampton officials selected Renaissance as master developer in a new push to revive the hamlet. Through CSPM Group, Riverside Rediscovered spent nine months gathering ideas and feedback from hundreds of residents, some of whom applauded as the plan was handed to town board members. Renaissance’s proposed zoning plan would create a built-up “hamlet center” around a busy traffic circle, and other districts for town houses, single-family houses and businesses. It also calls for opening up park land on the riverfront, which is covered in thick woods with no public access.

This entry was posted on Tuesday, May 26th, 2015 at 22:05 and is filed under Blog. You can follow any responses to this entry through the RSS 2.0 feed. Both comments and pings are currently closed.